I can almost hear the eyes rolling in your heads right now.  That title couldn’t be cheesier right?  Is this some article by an obsessive fan who thinks that she has some cosmic connection to Justin Timberlake?  No, not really.  I promise that I have a point and it will make sense if you can just hang with me for a little while.  Let me explain…

I wouldn’t call myself a huge JT fan, more of a nominal one.  I was at the perfect age to become a boy-band-crushing-teenager when NSYNC formed in 1995, a year before I graduated high-school, but I was always more of a 98 Degrees kind of girl.  And years later when all those 90s boy bands started breaking up, I really didn’t foresee a solo future for any of those guys.  But low and behold, Justin Timberlake surprised us all with his knowledge about the industry, musicianship, his vocal range and connections to all the right people.

Even as his career took off and matured, I was still a moderate fan.  I’d listen to his music from time to time, and took a break from it for a while when it was on the raunchier side.  Recently though it seems that Justin and I have regained some common ground–we’re only 3 years apart; we’re both parents; both married; both getting pretty reflective about our pasts and carefully considering the trajectory of our futures.

I’ve found more interest in his most recent album as I feel that it talks about “real” life (as “real” as your life can be when you’re insanely talented, an international superstar and a gazillionaire).   Knowing the life-cycle that rock-stars usually have, I also sensed that his career may be peaking, and with a slew of hits under his belt I thought if there was one JT concert tour that I should see, it would be this one.  So when I found out that he was coming to Raleigh, NC, I spent a little more money than I usually do to get General Admission tickets for my husband and me, so that we could be close to the stage for what I thought may be one of Justin’s best, last concerts. 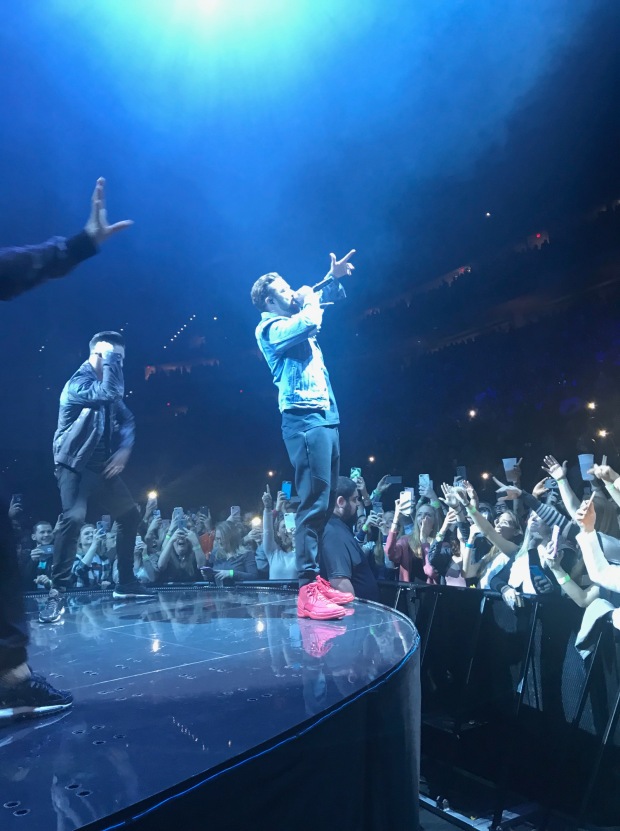 But my mind went to places that I didn’t expect as I watched the show.  Justin was handsome, yes.  His feet moved quickly and his body was all fluid, precise, smooth motion.  He smiled for cameras, fist-bumped fans, flirted with his back-up dancers, told us that we were the best crowd he’d seen (which of course was a lie), and all I could think was, yeah this is awesome, but then what?

You see, my husband and I were the minority of those crushed close to the stage.  We were surrounded by Superfans–those who buy their babies JT onesies; who follow him from concert to concert; who cry if he comes within four feet of them.  And yes I was woo-hooing with them all, but I walked away from the concert not marveling about Justin Timberlake, but rather about the awe he produced in about 20,000 people in one night, and realizing that he does this night after night with people around the world.

And it made me think about whether my/our awe has been misplaced?  What if I, what if we, directed even half of that awe, half of that amazement, toward the One who created Justin Timberlake, the One who gave him his talent?  As fans, we cluster to have an encounter with someone we pay to give us two hours of their time.  (And sometimes we pay a silly amount–especially if you’re sitting in the VIP section).  We might get a fist-bump or a high-five, but does that personal encounter really change us?  Does it take away our troubles, give us a sense of peace, a new identity?  Does Justin Timberlake really know any of the people he touched last night?  Will they ever really know him?

Of course, the answer to all of these questions is no.  Nothing about the concert last night has changed my reality this morning, and it certainly hasn’t changed his.  I’m the same person, living the same life with the same ups and downs, joys, sorrows, and okays.  I’m not richer or poorer, and Justin has continued on with his life, climbing into his tour bus bound for another city and another concert in front of another crowd of thousands.

But every day I can spend as much time as I want with the God of the universe, who stepped down out of heaven to, get this, PAY for an encounter with ME.  He gave up everything to be with me, and He offers to make me His for life through His Son.  He’ won’t just entertain me–He’ll hold me.  He won’t flatter me with savvy lyrics that speak to my vanity–He’ll speak the truth that gives life and nourishes my soul.  He won’t ever pack up and leave town–He’ll be my Immanuel, “God With Us.”  When He touched people, they were healed.  When He spoke, mountains rose up out of the sea and people fell flat on their faces in true awe.  When He sees you, you know that you are safe, yet you aren’t ever the same.

Isaiah 43:1,  “…this is what the Lord says–he who created you, O Jacob, he who formed you, O Israel: ‘Fear not, for I have redeemed you; I have summoned you by name; you are mine.”

I’m not saying that there’s anything wrong with spending money to see your favorite singer for a couple of hours.  I think music, dance and fun are gifts from a Good Father who loves to see His kids enjoy life.  I also disagree with those who say that there’s nothing beneficial or edifying that comes from the secular world of entertainment.  Simply because, God can do exceedingly more than we can ask or imagine (Ephesians 3:20), and I believe that if we are walking closely with the Maker and Sustainer of all things, that He can use most any setting, environment, crowd and subject to remind us of His presence and His glory.  I don’t think it’s a stretch to suppose that one other person could have experienced an awakening by the Living God last night during the Justin Timberlake concert, because God really is in the business of taking our wisdom and ideas of what we think we know to be true, and flipping all of it upside down to reveal HIS truth.  And if just one person entered into relationship with Jesus last night, then Heaven is certainly rejoicing just as loudly as it would after an Elevation or Lauren Daigle concert, and that makes it all worthwhile.

I not only reflected on Jesus last night at moments during the concert, but I also looked to my left at the handsome man that I call “Husband,” and remembered for about the 10,000th time why I’m so blessed to have him.  Bryan doesn’t really care for JT.  He only knows a song or two and we got into a pretty heated argument right before we left the house yesterday, but instead of refusing to accompany me and making me go alone, he got in the car.  That was humility.  He sat with me cheerfully and kept me company during the three-hour wait outside.  That was kindness.  He walked to a nearby restaurant and got us food and drinks so that we wouldn’t be starving after the show.  That was graciousness.  He stood beside me the whole time even though his calf muscles were knotted up and painful after a long run yesterday.  He even danced with me a little.  That was sacrificial.

I told Bryan before the concert began that even though I might scream and yell at Justin as he danced down the stage, I still think he’s hotter.  He replied, “yeah right.”  But as the concert ended, I knew I meant every word.  Because although Justin is certainly cute, charming and coordinated, he’s a stranger.  Yet Bryan, like Jesus, has demonstrated over and over again that he truly loves me.  He knows me. He takes care of me.  He does all of this so well that he’d even stand beside his wife as she snaps photos and videos of another man.  And he went home with me and was still there when I woke up this morning.  That’s a gift of faithfulness that God and Bryan have both given me, that is far more valuable than any concert ticket.  They make me feel like a VIP.

So Justin, if you read this, (doubtful, but a girl can dream) I want to say thanks for being a vessel for yet another Jesus-takeaway.  I’m sure that’s not what you expected, but I suspect you’d be amused.  Hope you have a great rest of your tour, and hurry home, I’m sure your wife wants you beside her too.

My silly-creepy “selfie” with JT.