Flomaton is an easily overlooked town in South Alabama.  It’s the type of place where there’s only one church to notice, and its steeple rises high above the modest ranch homes and one-story mom-and-pop storefronts.  It’s the type of place where you use landmarks instead of street signs to mark directions for newcomers (although there are rarely any of those), because there is only one chicken place, one supermarket, and one Subway sandwich shop in the whole town.

But it’s also where people live their whole lives as neighbors.  Where they remember the day you were born, the tree you were hiding in when you shot fireworks at passing cars, the day you met your husband or wife, and where your relatives are buried.  It’s the town where my grandparents proudly made their home and raised their four boys.  It’s where this story begins. 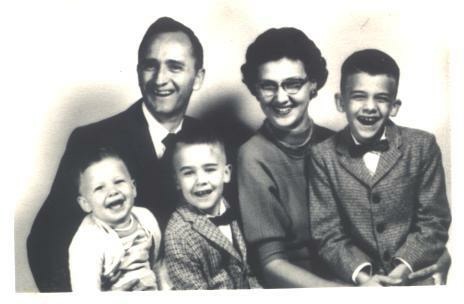 John and Shelmerdene Folsom with their sons (from left): Kenny, Mickey (my dad), and Johnny.  Baby Chris was born years later.

After serving in the Second World War my grandfather, John Folsom, took a job as a high-school principal at Flomaton High School.  He was known for his strict but fair leadership and disciplinary styles and was even known to dole out spankings to his students with a paddle, back when spankings were still acceptable in school.  This was back when girls’ skirts were very long, and boys’ hair was very short.  My dad tells a story of when he was sent to the principal’s office (or dad’s office) for sticking lizards on his ears to frighten his teacher and claimed that it was the only time he saw his dad crack a smile while disciplining a student.

John Folsom may have been tough on the job, but he was also caring.  He wanted to see kids succeed and do their best and expecting a lot out of them instead of viewing them as teenage disappointments earned him their respect.  He was generous—creating jobs for people who needed extra money and serving tirelessly at church and on various mission trips.  He was moral—practicing a high work ethic that stemmed from his upbringing and faith in God.  He was enthusiastic—boisterously singing hymns from the church pews or the Flomaton Hurricane fight song from the bleachers at football games.

About two years ago my grandparents, whom I affectionately call Paw-Paw and Mamadene, moved from their beloved home in Flomaton to an assisted living facility close to one of their sons, in Malbis, Alabama.  The move was emotional and a difficult step to take, but it was necessary at their life stage.  At 90-years-old, Paw-Paw was the last surviving member of his family of origin, the baby of 10 children in a typical Depression Era family.

Paw-Paw settled in well at his new home, happy as ever to just have people around him.  To him it didn’t much matter that he and Mamadene were confined to one room, if he still had his recliner and her in bed beside him at night.  It didn’t matter that he couldn’t remember his kids and grand-kids when they stopped by to visit him or take him to church, as long as he had people to talk to, although from time to time you could see a glimmer of recognition in his eye.  Even if he didn’t know your name, his mind seemed to recognize that you were his family.

This is what I saw in his eyes when I visited him in the hospital in Fairhope, Alabama last week.  It had been two years since I’d seen my Paw-Paw, on his 90th birthday and shortly before he and Mamadene relocated to The Blake.  Fortunately for Facebook, I’d seen pieces of his life down South—enough to know that he was enjoying being fed rich Southern cuisine and singing his favorite songs with his visitors.  But all of us knew that the day was coming when we’d get “that” call—the one that we didn’t want, that told us that Paw-Paw was no longer doing so well.

So, when my parents, who live near me and my family in North Carolina, called and told me that they felt it was important to get down to Alabama as soon as possible, I immediately felt an urge to go along.  I looked at my husband with pleading eyes and he insisted that I join my mom and dad on the 10-hour drive, practically shoving me in their car when they arrived at our house.  I thought about my Paw-Paw’s legacy the whole drive down–remembering the joy in his hearty laugh; the passion in his voice when he talked about the way things should be; his tradition of passing Certs down the pew, mid-service, to all the grandchildren in church; the way he pushed Heavenly Hash ice cream on me when I was a teenager.  I felt sad again, and somewhat cheated, that I didn’t get more time with my grandfather as a child because I was raised in an Air Force family, so I replayed the blocks of memories stored away in my mind from my brief visits with my grandparents and tried to refresh them.  I don’t know if I was using these memories as support for the potential pain that awaited me at the hospital, or if thinking of Paw-Paw that way was a connection to something deeper, to my roots and the people whose stories had contributed to my own.

Either way, I was not prepared for the emotion that rolled over me when I walked into his hospital room the next day.  I’d gotten three hours of sleep, and at 6:30am my mom and I received an ominous phone call from my dad, who’d gone straight to the hospital to sit with Paw-Paw during the early morning hours.  I choked back tears as I surveyed the scene. In his bed, Paw-Paw’s head was practically falling off the pillow.  His breathing was ragged and weak and he couldn’t stop coughing.  He was talking nonsense and not comprehending anyone’s questions or demands; he didn’t even know there were people in the room with him.  He was listless and drawn.

I was convinced that he would be gone that morning.  I started talking to my mom about plans for a service.  I wondered aloud where all the family members would stay in the tiny town of Flomaton.  I cried quietly as I considered that Paw-Paw’s death would mean the end of a family.  I listened to the hymns that my cousins and uncles and aunts sang around him with a feeling of finality.  When I placed my hand on his shoulder and sang “Great Is Thy Faithfulness,” it was not with a heart of hope, but with the intention of saying goodbye in a way that would somehow speak comfort to Paw-Paw’s retiring mind, because I knew that he always loved music.

I kept expecting the worst, because to me, he was now 92 and it would kind of make sense if this was his time to go.  He’d lived a wonderful life—he’d traveled the world, even flew to Nicaragua in his late 80’s to see his oldest grandson get married.  He’d been a role model to young men in his community, a loyal husband, a cheerful giver.  It never occurred to me that first day, watching my bed-ridden grandfather, that he might have more life to live.

More family poured into the room.  More hymns were sung.  On Facebook people were asking for prayer for John Folsom.  People were already telling stories about what he’d meant to them, and as I read them or heard them read aloud to Paw-Paw, I saw them all as eulogies memorializing a great man, not an encouragement to boost his spirits.  But I was so wrong.

24 hours later Paw-Paw was more responsive.  He noticed us when we stood by the bed, although he still didn’t recognize us.  His eyes were clearer, and he expressed a desire to write notes, he said he was hungry, he laughed when something was funny.

And he sang.  Oh, did he sing.  What I realized sitting in that hospital room was that even though Paw-Paw couldn’t remember people, he could remember lyrics, and it seemed that he used lyrics of songs to communicate his feelings, and to me it was as though God was using these songs from Paw-Paw’s life to communicate to us that Paw-Paw still had hope, that his faith was alive, and that God was watching.  When we asked him what his favorite song was, his eyes lit up like a child’s and he launched into the Flomaton high-school fight song:

We can win if we will try

So, fight on for Flomaton High.”

And over the next few days I started believing that the lyrics to that song had a deeper meaning to Paw-Paw than just being the fight song for the school where he’d been a leader for 30 years.  They seemed to be the very words of his soul, a sort of rallying cry—urging him to fight, to get better, to show God’s healing power in his aged body.

And I was proven wrong over and over in those few days.  I didn’t believe that the wheezing in his breath would go away, but it did.  I didn’t think that he would start eating again, but he did.  I didn’t think he’d be strong enough to stand up, but he did.  And before any of us knew it, the hospice evaluators were telling us that he no longer qualified for their care, and the doctor directly referred to Paw-Paw as “the miracle man.”

At some point in all the sitting around at the hospital, someone mentioned that Flomaton High School’s football team was in the state championship playoffs that very week.  In the school’s history, since it opened in 1925, it had never gone farther than the quarter finals.  My uncle and cousin promised to get the game on TV so that Paw-Paw could watch, although when they first brought it up, several of us were skeptical that he’d still be alive to see it, or conscious enough to know it was even playing.

Paw-Paw was transferred to a local rehabilitation facility on Wednesday, December 5, and on Thursday, December 6, my mom and I walked into the Westminster Skilled Care center in Spanish Fort, Alabama and saw my Paw-Paw sitting up in a chair for the first time in a week, eating some mashed potatoes and macaroni and cheese, and watching the Flomaton Hurricanes play their hearts out.  As I listened to the drawl of the local announcers and watched each play inch the Hurricanes closer to a state championship, I allowed myself to marvel over the miraculous events that were too perfectly arranged to be called coincidence.  I felt ashamed that I’d been so doubtful, so ready to assume that my grandfather’s life was over, when God clearly had other plans and others around me had demonstrated more hope than I.  I was also relieved and touched, that the Lord would be so good to give my Paw-Paw even a day longer than we had imagined, that He’d been good enough to include me as a witness to His work so that my faith would increase.  And as the Hurricanes caught a victory-clinching interception, I smiled that He loved my Paw-Paw so much that He would strengthen his body enough to sit up and watch his hometown’s football team win their first ever football championship.

We sang the fight song, together, for the camera.  And my Paw-Paw finished it with a smile and a hip-hip-hooray.  And a swig of sweet tea.