I have an annual tradition for Mother’s Day that began about five years ago.  Every year, I throw a party for my local mommy-friends.  We gather without husbands and children with no purpose other than to celebrate the one thing that we all have in common—being mothers.  I can always tell that those who are new to the party aren’t sure what to expect because there’s no agenda at all.  I’m not trying to sell Pampered Chef, Norwex or Lula Roe.  I’m not raising money for a charity.  We’re not throwing a baby shower for anyone, and most difficult for these sweet women to wrap their heads around is that I don’t need them to bring anything.  They are so accustomed to helping and serving that showing up to something empty-handed, and then consuming food and drink, seems selfish.

And that’s exactly why I do this.  Moms throw parties for their children.  They bring food to families welcoming newborn babies, struggling with serious illness or recovering from surgeries, or mourning a loss.  They are always so busy working, working working—inside and outside their homes, that they often forget how it feels to enjoy their own brand of fun.

My Mother’s Day parties have varied in their style and size over the years.  One was a fancy brunch, several were evening parties with lots of snacks and wine and a chick-flick about motherhood.  We’ve played funny ice-breaker games at a couple, and at my first one I asked everyone to bring photos of them with their mothers or of them with their children.  But one thing that all my parties have had in common is an interesting blend of women.

My friendship spheres sometimes intersect, but many times they don’t, and what I love about my parties is that they are comprised of women from many different countries: Americans, Brits, South Africans, Canadians, Swiss, Australians, Luxembourgers, Belgians.  They’ve been comprised of women with different religious beliefs: Atheists, Christians and Muslims.  I’ve invited moms I’ve met through church, mom’s groups, the gym, my neighborhood, my children’s’ school, and through some very random connections.  I’ve invited women from different ethnic backgrounds.  And the beauty of this gathering is to see them begin to open up to one another as they laugh and relax, to watch them discover the things that they have in common with each other as they gather as mothers.  In a world where we tend to congregate with those groups of people who are most like us, what I seek to provide in this environment is an opportunity for the Lord to reveal His nature in the surprise that comes when we find a kindred spirit in someone we may never have spoken to otherwise.

But this year, when I decided to go with a Zumba theme for my party, I discovered that Phariseeism is alive and well. I know that my party idea this year was a little unusual, but it’s very frustrating when people assume the worst about something you’re doing simply because they misjudge your intentions.  Because I know that God desires hearts and community, I knew that He could even use my Zumba party to spark conversations about Him, and to build friendships that can lead to testimonies of His goodness.

And I don’t know what judging a fellow sister in Christ for throwing a dance party will profit anyone.  Does it make the judge happier to declare the party unholy or inappropriate?  No, it just divides the family of God even more because it pits one person against another over something that’s really a gray area.  I bet if I asked those critical of the party if they really thought that Jesus loves them more because they think my party was a bad idea, they’d honestly say no, so why bother judging?

Would it benefit me to argue with people to try to convince them that my way was right, that my party was okay?  No, because it’s not my job to try to win an argument and allow myself to be distracted by someone’s opinion of me.  And to get wrapped up in defending myself would waste energy that I could be spending loving on people, and it would make me angry instead of filling my heart with compassion for those who are picking my choices apart.

Would it be better for the party not to happen and for none of these women to interact and socialize?  I say no, because God is all about seeking people out and building relationships and opportunities to share the gospel.  So by now, the ladies who came to my soiree and are still reading, have learned that my surface goal was to have fun with my menagerie of friends from my life here in Raleigh, NC, but as usual with me, there was an underlying purpose, which was to serve up just a taste of the goodness and extravagance of the Lord’s love by loving on my friends.  To show them what joy and fellowship and diversity exists in the kingdom and family of God.  And I don’t think that any Pharisee could argue with that.

And you know what?  I suspect that Jesus loved a good party, and maybe even a little dancing. 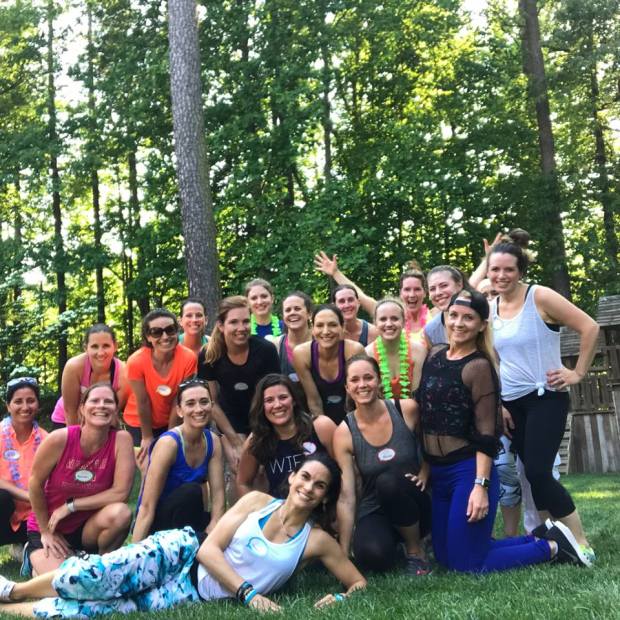 2 thoughts on “Party On–Joy in the Face of Judgment”